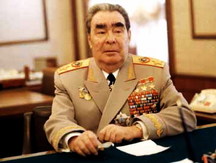 "Whatever else may divide us, Europe is our common home; a common fate has linked us through the centuries, and it continues to link us today."
- Leonid I. Brezhnev

•Led Soviet Union from 1964-1982
•Many think this is a period of deterioration for USSR due to party “apparatchiks” left over from the Stalin regime wanted to return to the old status quo
•Made famous the Brezhnev doctrine:
•“It was the right and duty of fraternal socialist countries to intervene in each others affairs when socialism was threatened”
•He makes this while intervening in Czechoslovakia in 1968

Summary: Brezhnev was in charge for 18 years, after Lennon, when he dies Stalin comes in. Leonid Ilyich Brezhnev was the General Secretary of the Central Committee (CC) of the Communist Party of the Soviet Union (CPSU), presiding over the country from 1964 until his death in 1982.